We support hospitals inside Syria to provide necessary emergency medical relief and healthcare to affected Syrian people.
Distributing medical consumables to 120+ field hospitals and 200+ medical points across Syria with total budget of $13,000,000.

Hospital Support Initiative:
Hospital Support Initiative provided support to over 50 local hospitals across the country, serving tens of thousands of patients and conducting over 3000 major surgeries on a monthly basis. Each major surgery was estimated to cost an average of $100 per surgery.
The initiative was started shortly after starting the EMR system in 2013 to support the work of hospitals and medical staff inside Syria to:
OUR MAJOR HOSPITALS AND EMERGENCY RELIEF PROJECTS:
UOSSM Bab Al-Hawa Hospital (BHH): Established in 2013 and fully operated by UOSSM, BHH is the largest emergency and specialty hospital in the Northern region of Syria. BHH serves 14,000 patients and conducts an average of 1300 surgeries per month and is considered one of UOSSM's major initiatives inside Syria. Currently, it is considered the major emergency and specialty referral hospital in Northern Syria. It provides wide range of specialty medical and surgical services including, Orthopedic, Neurosurgery, Vascular, General Surgery, Ophthalmic Surgery, Maxillofacial, Pediatric Surgery, E.N.T Surgery and Colonoscopy.
BHH Major Departments:

Al Bernas Hospital in Syria: which provides medical care to more than 25,000 females and conducts an average of 145 deliveries on a monthly basis with a focus on maternity and pediatrics.

1) Sarmada Center is located in Idleb suburb. It provides free-of-charge medical care to Syrians with war-related injuries and casualties with a capacity of 60 beds. Physical therapy and psychological support are provided along with wound care and medical treatment.

2) Dar Al Karama Center is located in Deraa suburb and is equipped with 71 beds. It provides medical care services to an average of 1950 beneficiaries on monthly basis.

3) The Syrian Medical Center (SMC): One of UOSSM’s major initiatives is the establishment of the post-operational, rehabilitation center in Reyhanli, Turkey. Since June 2012, SMC has expanded its services to include both inpatient and outpatient departments, providing quality wound care, physiotherapy, psychotherapy, medical therapy, urological care to spinal cord injuries, radiology, and cardiac echography (equipped with modern digital x-ray). The center provides complimentary healthcare services to more than 130,000 Syrian refugees in Reyhanli and it also has an office for documenting human rights violations, in coordination with Physicians for Human Rights. 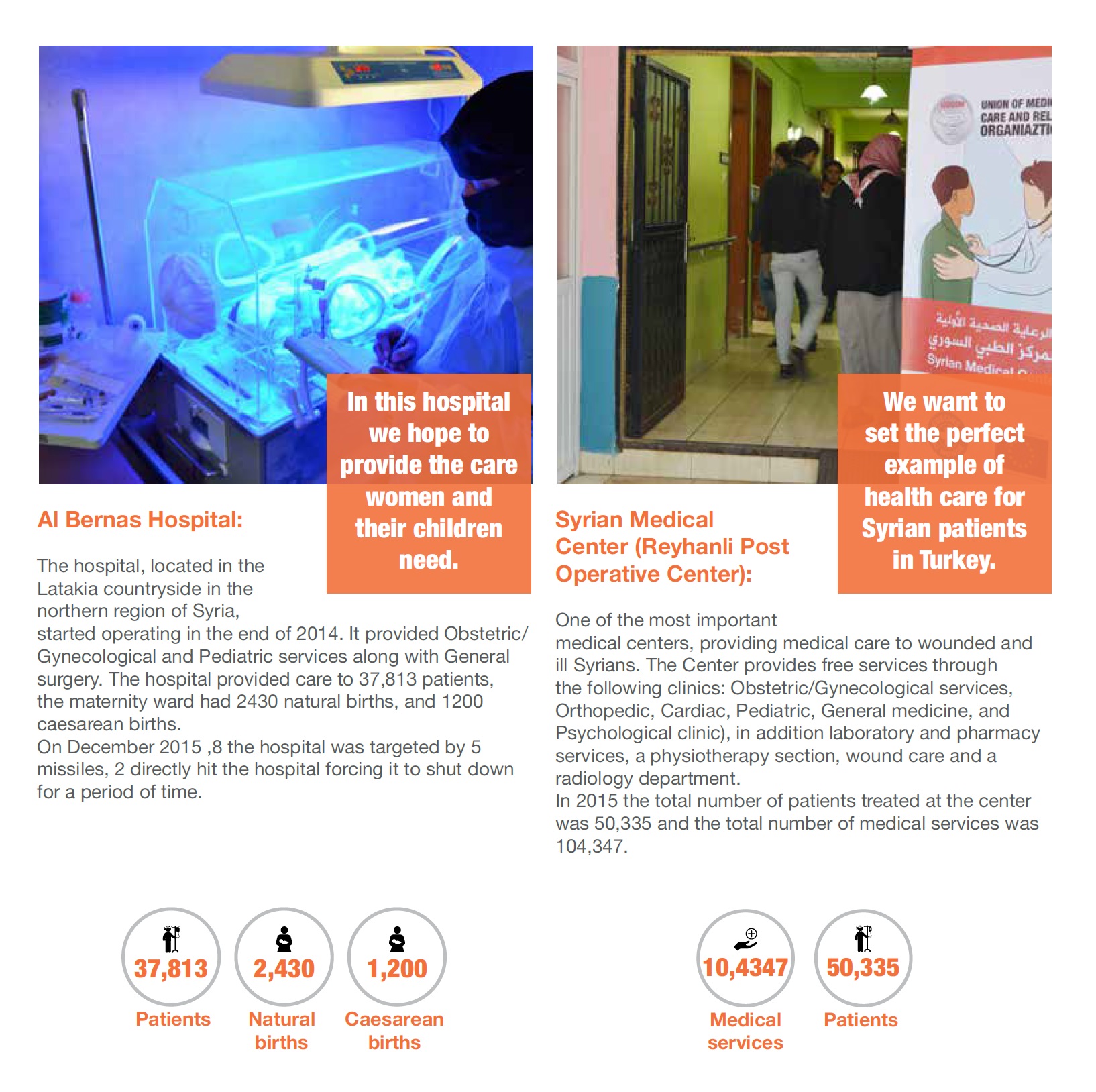 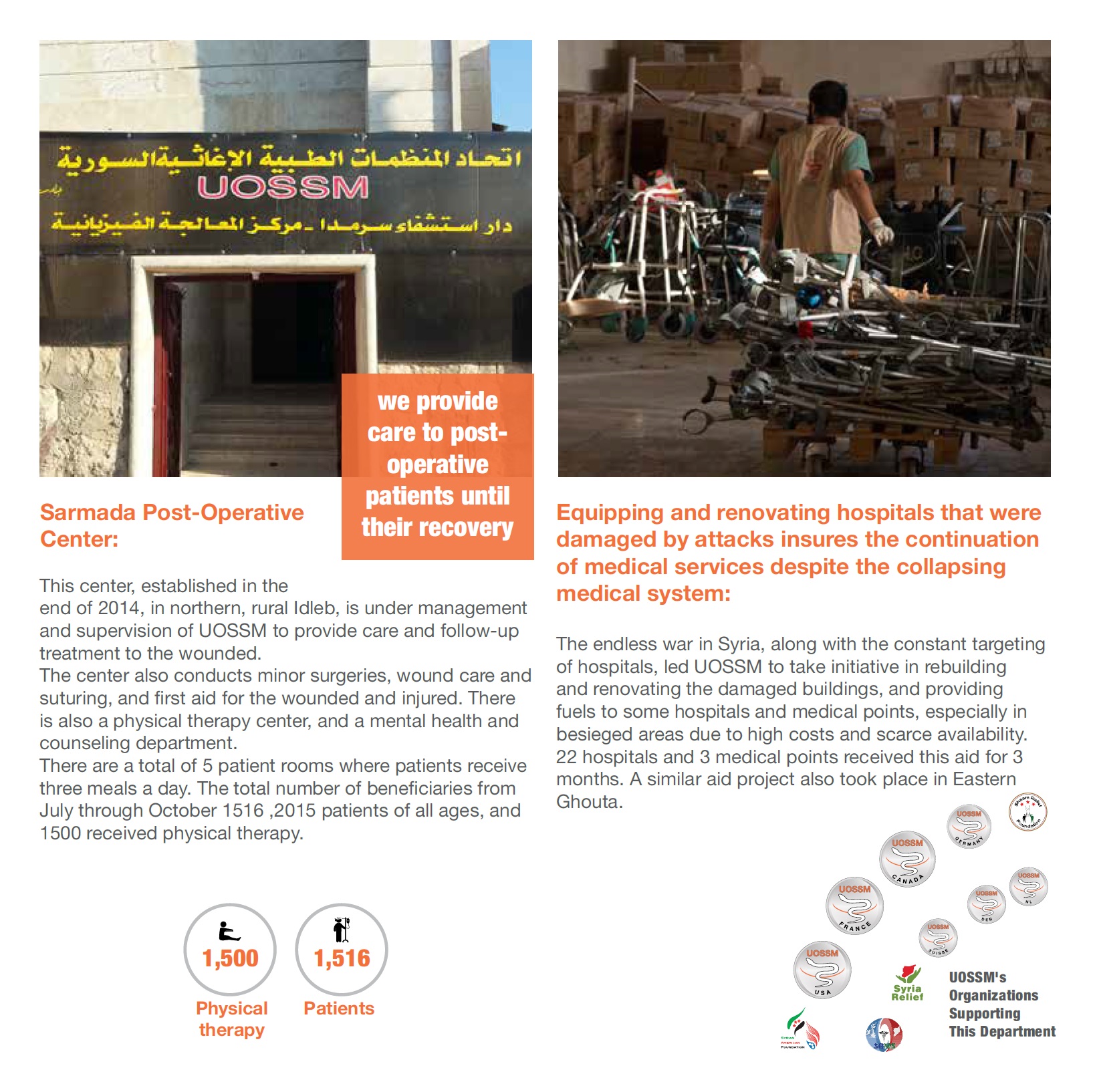 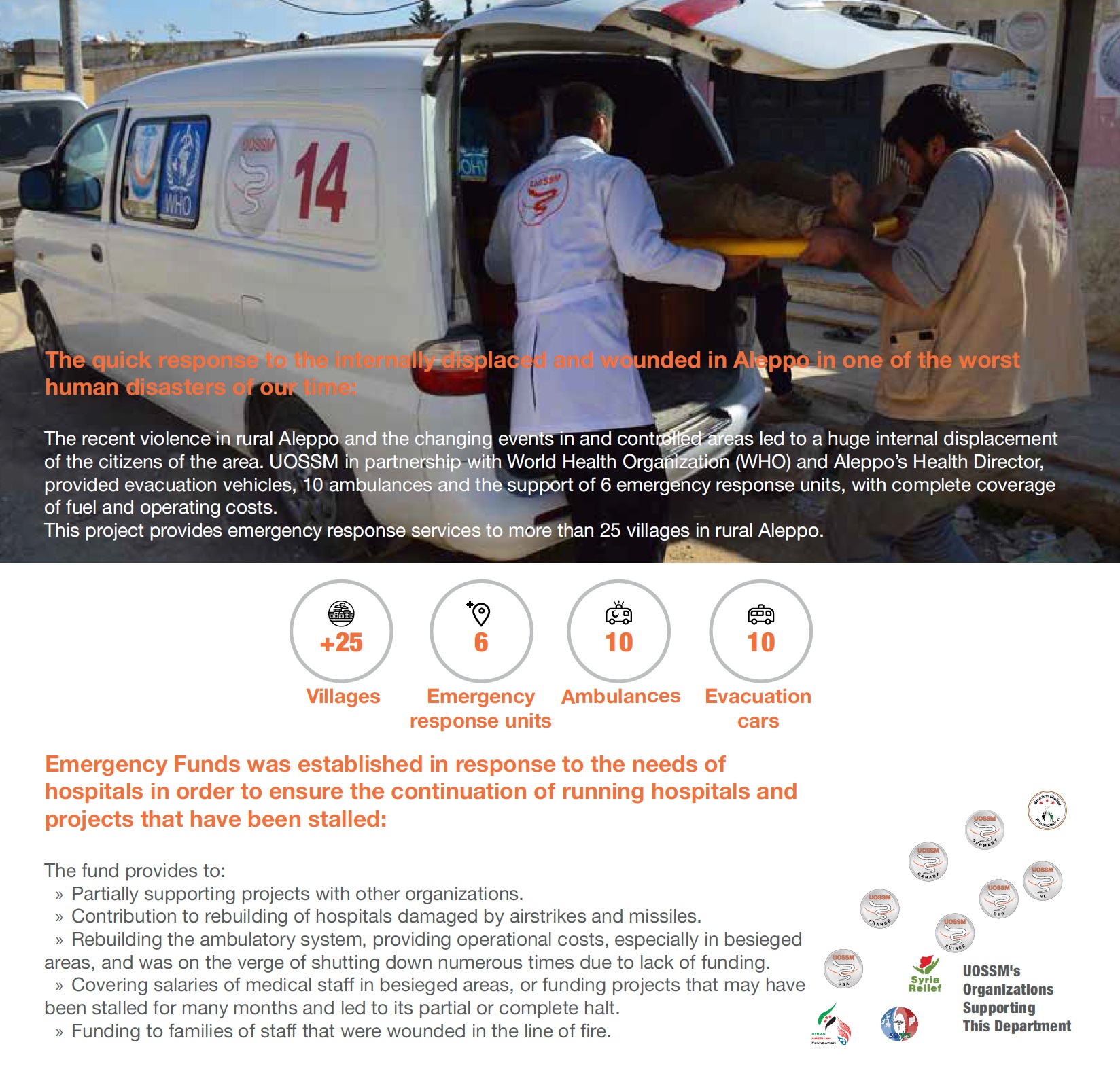