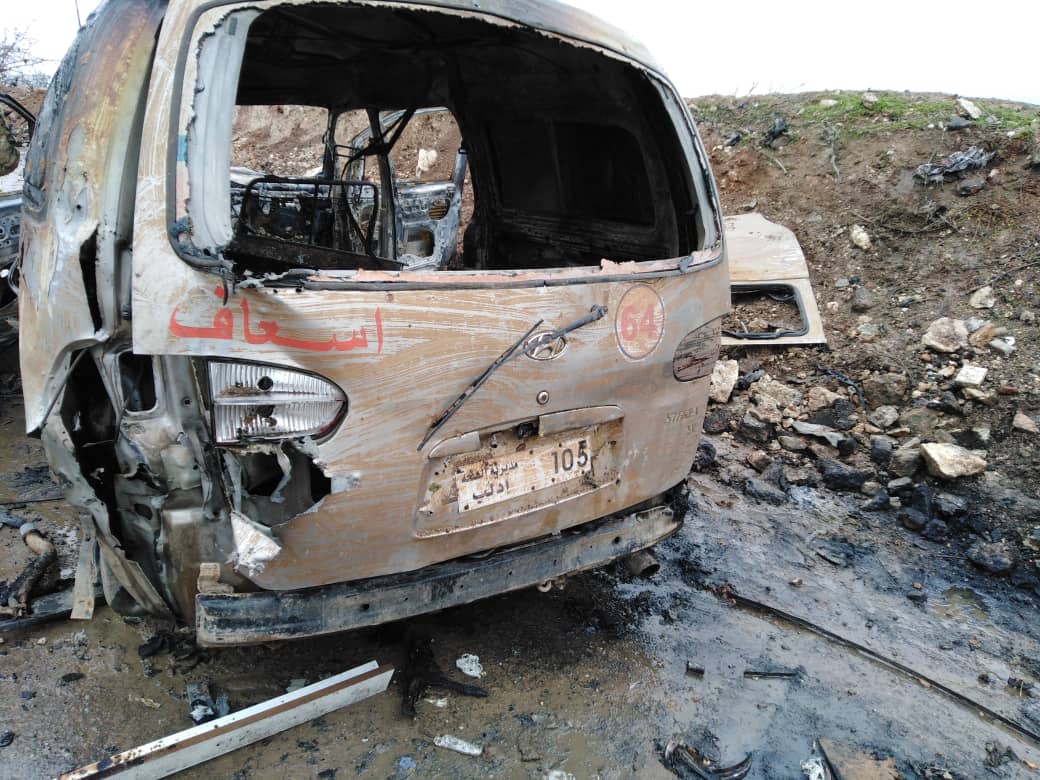 Three medical staff were killed in a targeted attack on an ambulance on February 6, 2020 at 8 pm Damascus time, as they were headed to provide emergency services to victims of airstrikes in Idlib City. Abdul Rahman Hilal, a UOSSM driver was among those killed as he was on his way to provide life saving services. At least three other civilians were killed in the attack and six were wounded. Please click here to read the full  press release. 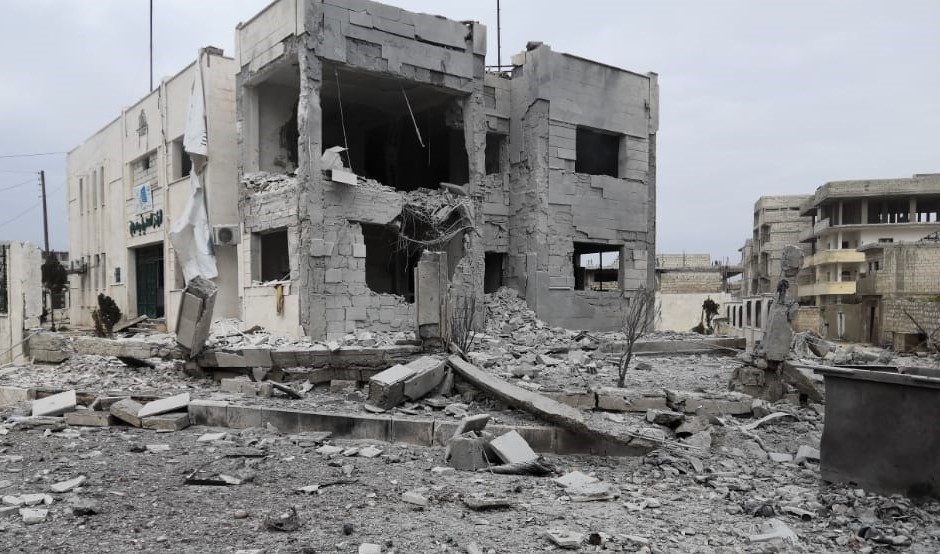 Four medical facilities were attacked within 24 hours in Idlib, Syria further crippling a devastated health care system in Idlib. Today, at 5:40 pm Damascus time Al Hikma Hospital in Taftanaz Idlib was targeted by a barrel bomb 50 meters from the hospital causing damage and putting the hospital out of service. No casualties were reported. The hospital, supported by UOSSM, was operating on an emergency only basis and provided services to over 4800 patients in January.
Today, at 11:35 am Damascus time, Al Nour Hospital in Taftanaz was damaged from bombings around 300 meters away. The hospital sustained minor damages and was put out of service. The same hospital was damaged on Tuesday at 12:25 am Damascus time, by an indirect attack. Please click here to read the full press release.
Read more 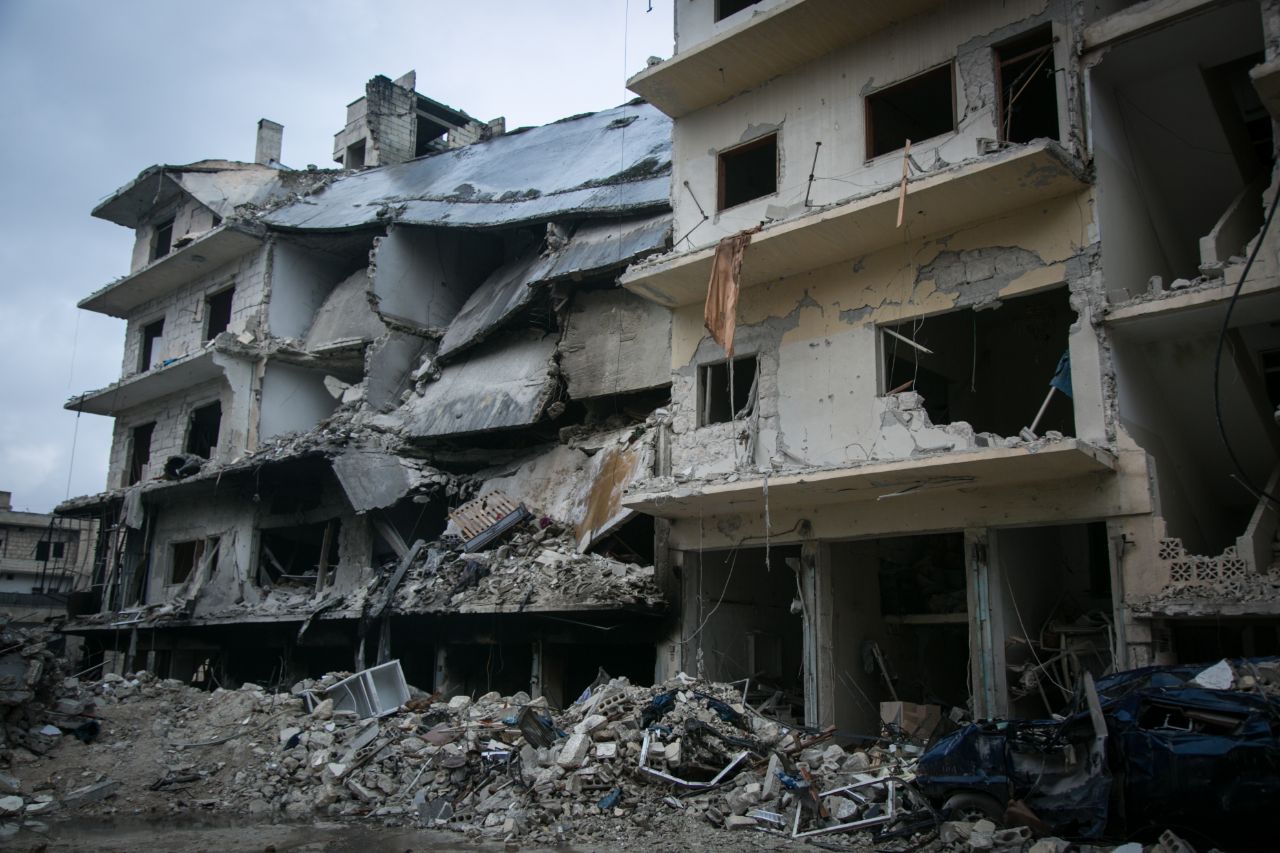 On January 29, 2020 at 22:40 Damascus time, multiple airstrikes hit Al Shami Surgical Hospital in Ariha, Idlib injuring four nurses, the director of the facility and an administrator (in critical condition).  At least six people were killed as they waited outside the hospital.The hospital was heavily damaged and put out of service. Since April 2019, there have been at least 74 attacks on medical facilities.  In the past 48 hours, over 80,000 civilians have been displaced from Ariha and Saraqeb, fleeing heavy airstrikes on civilian areas.  Since January 1, at least 138 civilians have been killed.

According to OHCHR monitoring, from January 15 to 23, OCHR confirmed incidents in which at least 81 civilians including 13 women, 14 girls and 20 boys were killed as a result of airstrikes and ground operations. Of these, eight civilians including four women and two boys were killed in Aleppo city and 44 civilians including seven women, 13 girls and 11 boys were killed in western rural Aleppo alone – more than 50% of the total.
From December 1, 2019 to January 27, 2020, the UN reported nearly 390,000 people were displaced. Given the challenges in collecting data in active conflict, UOSSM estimates the number of internally displaced to be significantly higher. Roughly 80% were women and children, and were displaced mostly from large population centers such as Saraqeb and Maarat Al Nouman, as well as smaller towns and villages in southern Idlib. Many have been displaced multiple times, increasing their vulnerability and inability to cope. 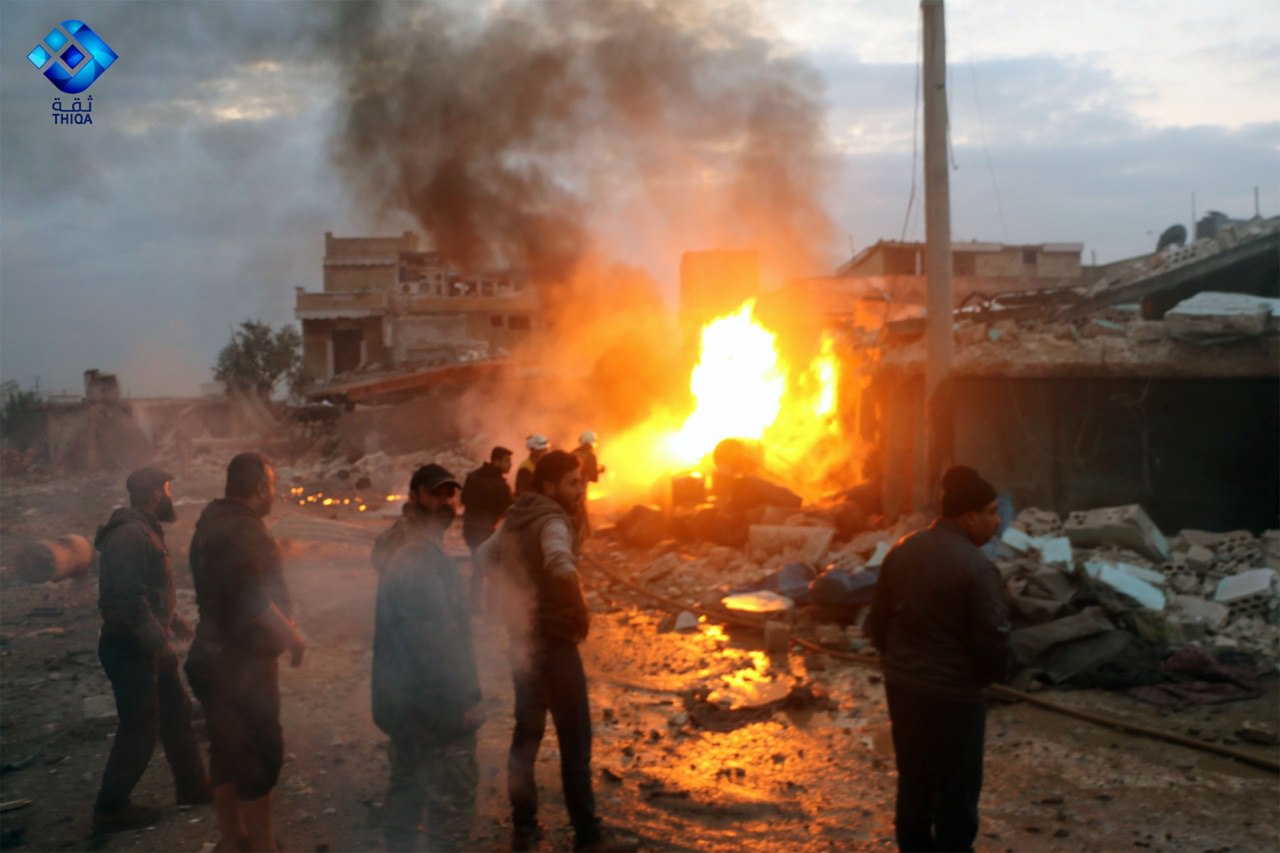 UOSSM denounces the airstrikes on civilian areas of Idlib and Aleppo yesterday, January 21, within the de-escalation zone. The attack killed at least 35 civilians and injured countless more. Today, the airstrikes continued leveling areas of Maarat Al Nouman and Aleppo. In the past 10 days, 73 civilians were killed including 27 children and at least 11,700 families have been displaced. Please click here to read the full press release. 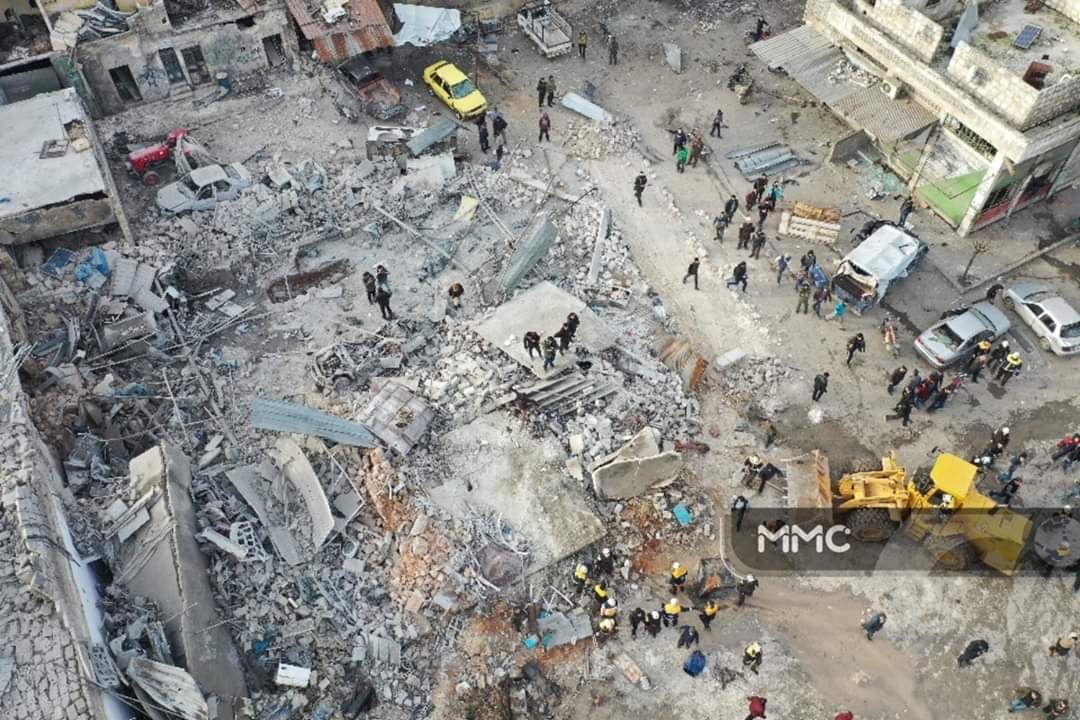 On January 15 at 2:06 pm Damascus time, a massive airstrike hit the crowded Al-Hal Market in Idlib City, Syria killing at least 19 and injuring at least 65 civilians, including many women and children. This new military campaign on Idlib City, which started last week, poses the greatest threat to millions of civilians since the start of the conflict.
Last year, the UN counted 82 attacks on medical centers, leaving the medical infrastructure decimated in Idlib and unable to handle another escalation of violence.  The winter weather in Idlib is currently near freezing temperatures and rainy, exposing hundreds of thousands of internally displaced people to the harsh conditions without adequate shelter. Please click here to read the full press release.
Read more

UOSSM Meets With President Emmanuel Macron About The Humanitarian Disaster In Idlib, Syria 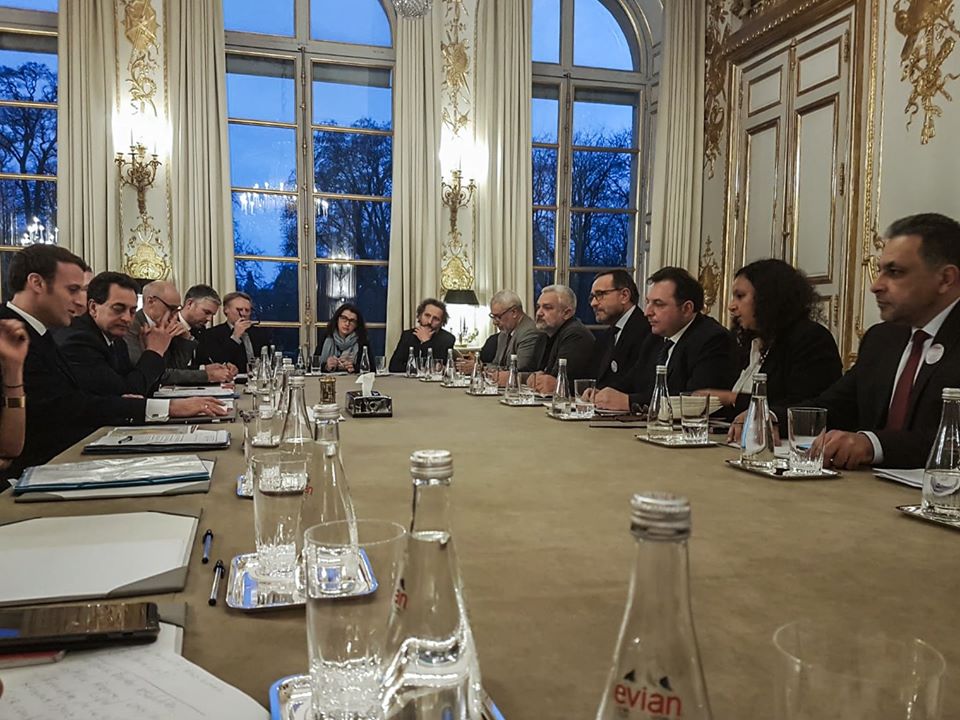 UOSSM was received on January 8, 2020 at the Élysée Palace by President Emmanuel Macron, along with 15 other humanitarian organizations operating in Syria.
Dr. Ziad Alissa, President of UOSSM France and Professor Raphael Pitti, UOSSM Training Manager & Board Member, discussed the tremendous suffering of the people in Idlib and the immediate need for bold action. Please click here to read the full press release.
Read more

A week of relentless airstrikes, barrel bomb attacks and artillery strikes have devastated Maarat Al Nouman and the South Eastern Idlib countryside in Syria. At least 38 civilians were killed this week including eight women and seven children.  Hundreds more have been wounded and the casualty count is expected to rise significantly.  In the past week, at least 60,000 civilians were internally displaced and face harsh conditions during the start of winter.  Medical facilities, already crippled by a year of attacks, are struggling to deal with the influx of wounded victims. At least 68 medical facilities have been attacked since April 2019. Please click here to read the full press release.

BREAKING: Second Hospital Bombed in One Week in Syria

A second hospital was attacked in Idlib, Syria yesterday. Al Rawda Hospital in Kafranbel, Idlib was bombed in a targeted attack on November 26, at approximately 7:39 p.m. Damascus time. The hospital was damaged and put out of service. No casualties were reported since the hospital was evacuated earlier. Please click here to read the full press release. 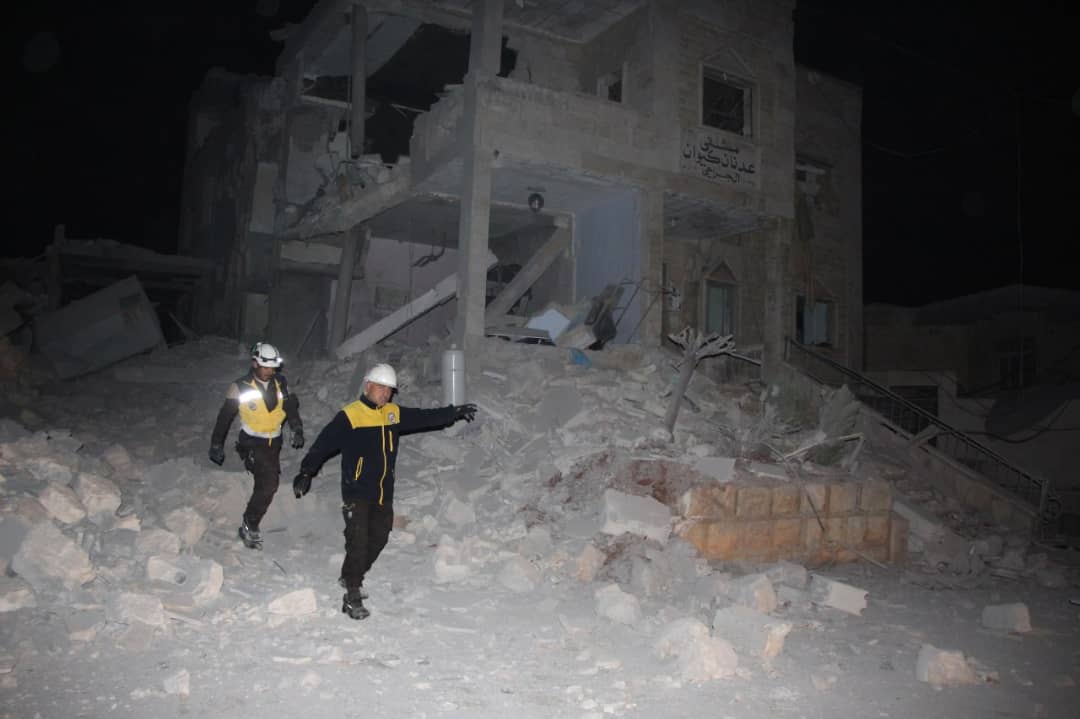 At 9:21 p.m. Damascus time on November 24, 2019, the Al-Kiwan Hospital in Kansafra, Idlib was hit by an airstrike and destroyed. The facility was evacuated prior to the strike and no casualties were reported. This attacks marks the 66th medical facility attacked since April 2019. The hospital was partially supported by UOSSM. Please click here to read the full press release.

Deadly Attack Today in Qah Camp for the Displaced in Northern Idlib, Syria 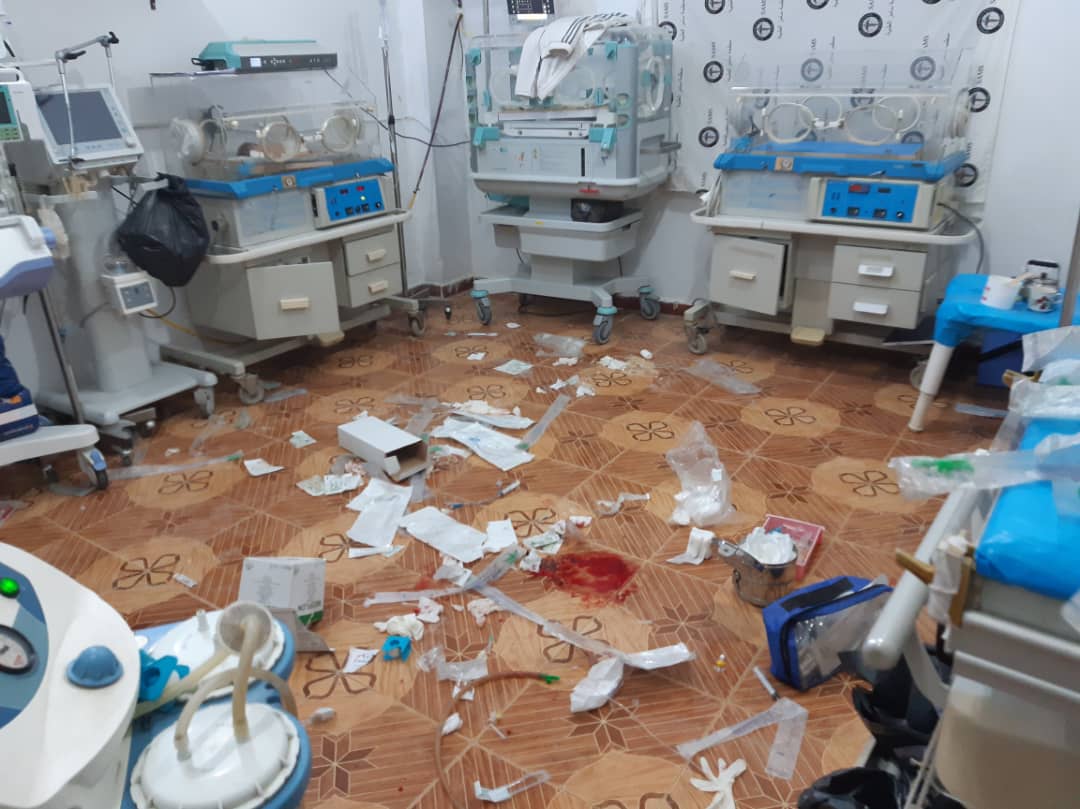 There was a deadly attack today in the Qah Camp for the displaced in northern Idlib, when a missile landed in the camp wreaking havoc and causing widespread fires. At approximately 8:15 p.m. Damascus time the camp was hit with a missile causing a loud explosion. At least 12 were killed and over 20 were wounded, the majority of victims were children and women. Please click here to read the full press release.